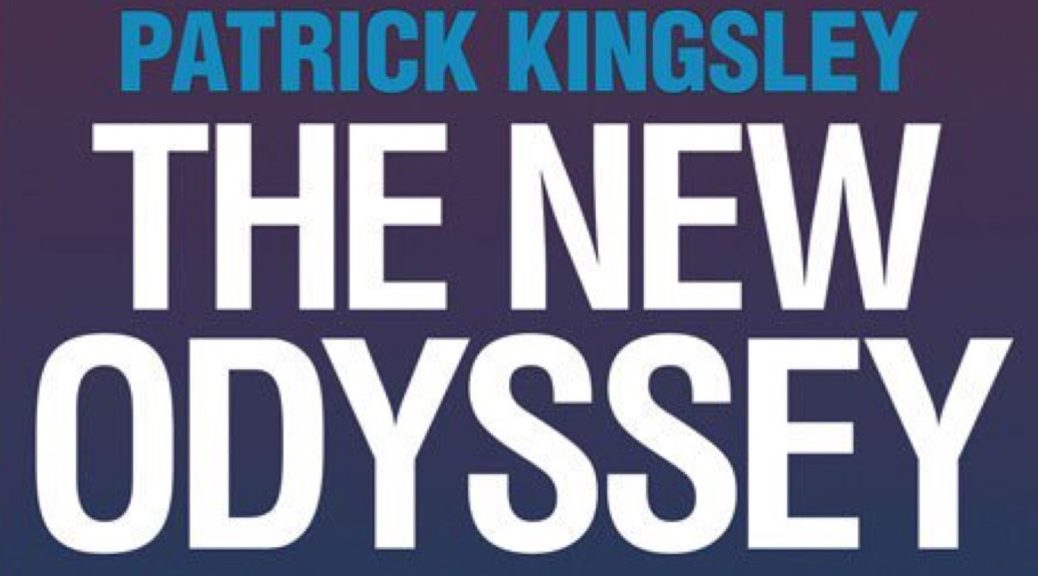 The title of your book is The New Odyssey. The Story of Europe’s refugee crisis. What’s the reason that led you to compare the classic epic to the contemporary European migration crisis?
There are two main reasons: the first reason is that the journey that Odysseus goes on from a war, torn apart Asia minor, trough dangerous adventures in the east of the Mediterranean towards Greece. It is obviously very similar to the journey that lot of refugees are making in 2015 and indeed continue to make today. Refugees are leaving from Turkey not too far actually from where Troy was supposed to have been built a thousand of years ago. They are attempting to get to a Greek island not unlike Odysseus was trying to reach the Greek Island Ithaca. And the second reason is an editorial reason: by framing migrants as Greek heroes I hope someone shift the narrative about who these people are or why they are moving. In certain sections of public opinion migrants are often considered bad and problematic, but I wanted to show how in another light what they are doing is heroic.

Aeneas, as well as Odysseus, has fled the war but he is fulfilling his destiny of setting up a new dynasty, finding a new home, rather than going back home as Odysseus. Why did you decide to change the first chosen title The New Aeneid to The New Odyssey?

I would have called The New Aeneid if more people in the English-speaking world had heard of the Aeneid. As I said in the book and as you repeat in your question, Aeneas is more a refugee than Odysseus because Aeneas is fleeing his home in search of a new one whereas Odysseus is fleeing a warzone in order to go back home. Instead of that, the reason why I didn’t call The New Aeneid but The New Odyssey is that not many people have heard of The Aeneid but they have heard of The Odyssey because it is more famous in the English speaking world.

To what extent Aeneas and Odysseus represent the refugee experience and how? You said that central narrative in The Aeneid is about a refugee called Aeneas. Is Odysseus then, in your opinion, a different symbol of the migration experience?

Aeneas and Odysseus are both on the move and they shared the travel experiences –  tough experiences –  but one of them, Odysseus, is going home, and the other, Aeneas, is leaving home and trying to find a new one, and that is much more comparable to the contemporary migrants experience. I don’t think Odysseus journey has a particularly close contemporary comparison, maybe you might compare Odysseus’ journey home to a migrant in Libya who decides, instead of going to Italy, to go back home but going back through the Sahara desert is just as dangerous as trying to go through the Sahara in the first place, and trying to get to Libya. So maybe one might compare their experience: an African migrant experience trying to get back to Nigeria or Senegal to Odysseus and his journey back to Ithaca, but I don’t think it is a particularly close resembles.

Your reporting is based on a thematic focus, rather than one geographical location. What are the pros and cons of this specific focus?

I think it does look at themes that make me to go to specific geographic locations like Libya, Egypt, Niger, Greece, Italy, Turkey and I would hope that by exploring themes you do actually get a good sense about placing and about the environment in which people are coming from and do some moving through.

Your text is a narrative report about travel and emigration, offering its readers a clear and detailed full experience of nowadays emigration. What’s the book genesis?

I was the migration correspondent for “The Guardian” and I had the opportunity to see the refugee crisis of 2015/16 and I was able to travel through several countries: from Sahara to Niger, from Sweden, to Turkey, from Italy to Greece.  In the end for the book I choose 17 countries but in the course of my report I poorly went to 24/25 and during my reporting, I felt that I had the privilege to see the crisis in more detail than most other people. I wanted to be able to put all the things that I have learnt in a single narrative that hopefully might open some people’s eyes to a more new understanding of why people are on the move and how they move in the first place, and it was an attempt to use all the things that I have learnt to help enhance public discuss.

Your book moves from report to literature, using prose’s characteristics while fulfilling the facts and the reality though Hashem al-Soukis’s story. Is there any editorial aim behind this choice? Or does it specifically want to show a connection between one single life to a universal common destiny?

This decision to use a little more literally  form of writing for Hashem al-Soukis’ storywas just an attempt to make it more vivid and engrossing and to make you feel like you are there with him, and by writing not only in a factual way but in a way that was written like a novel. I hoped that a reader might be able to identify more with him slightly more because the journalistic prose might be more alienating to the reader than the more fluid and warm-hearted literary style.